So! In Parts 1 and 2 I covered getting this old thing cleaned up, getting it booting, hacking together a boot floppy disc and getting a working file transfer onto a work floppy disc.

First up - what's the hard disk? Well, in the 90s we could still get plenty of MFM and early IDE hard disks to throw into systems like this. In 2020, well, we can get Very Large IDE disks from NOS (like multi hundred gigabyte parallel ATA interface devices), but BIOSes tend to not like them. The MFM disks are .. well, kinda dead. It's understandable - they didn't exactly build them for a 40 year shelf life.

The IBM PC, like most computers at the time, allow for peripherals to include software support in ROM for the hardware you're trying to use. For example, my PC/AT BIOS doesn't know anything about IDE hardware - it only knows about ye olde ST-412/ST-506 Winchester/MFM drive controllers. But contemporary IDE hardware would include the driver code for the BIOS in an on-board ROM, which the BIOS would enumerate and use. Other drive interconnects such as SCSI did the same thing.

By the time the 80386's were out, basic dumb IDE was pretty well supported in BIOSes as, well, IDE is really code for "let's expose some of the 16 bit ISA bus on a 40 pin ribbon cable to the drives". But, more about that later.

Luckily some electronics minded folk have gone and implemented alternatives that we can use. Notably:

Now, I bought a little XT-IDE + compact flash card board off of ebay. They're cheap, it comes with the universal IDE bios on a flash device, and ...
... well, I plugged it in and it didn't work. So, I wondered if I broke it. I bought a second one, as I don't have other ISA bus computers yet, and ...
IT didn't work. Ok, so I know that there's something up with my system, not these cards. I did the 90s thing of "remove all IO cards until it works" in case there was an IO port conflict and ...
.. wham! The ethernet card. Both wanted 0x300. I'd have to reflash the Universal IDE BIOS to get it to look at any other address, so off I went to get the Intel Etherexpress 8/16 card configuration utility.
Here's an inside shot of the PC/AT with the XT-IDE installed, and a big gaping hole where the Intel EtherExpress 8/16 NIC should be. 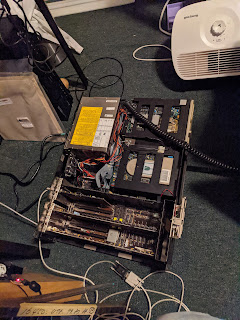 No wait. What I SHOULD do first is get the XT-IDE CF card booting and running.
Ok, so - first things first. I had to configure the BIOS drive as NONE, because the BIOS isn't servicing the drive - the IDE BIOS is. Unfortunately, the IDE BIOS is coming in AFTER the system BIOS disks, so I currently can't run MFM + IDE whilst booting from IDE. I'm sure I can figure out how at some point, but that point is not today.
Success! It boots!
To DOS 6.22!
And only the boot sector, and COMMAND.COM! Nooooo!
Ok so - I don't have a working 3.5" drive installed, I don't have DOS 6.22 media on 1.2MB, but I can copy my transfer program (DSZ) - and Alley Cat - onto the CF card. But - now I need the DOS 6.22 install media.
On the plus side - it's 2020 and this install media is everywhere. On the minus side - it's disk images that I can't easily use. On the double minus side - the common DOS raw disk read/write tool - RAWREAD/RAWRITE - don't know about 5.25" drives! Ugh!
However! Here's where a bit of hilarious old knowledge is helpful - although the normal DOS installers want to be run from floppy, there's a thing called the "DOS 6.22 Upgrade" - and this CAN be run from the hard disk. However! You need a blank floppy for it to write the "uninstallation" data to, so keep one of those handy.
I extracted the files from the disk images using MTOOLS - "MCOPY -i DISK.IMG ::*.* ." to get everything out  - used PKZIP and DSZ to get it over to the CF card, and then ran the upgrader. 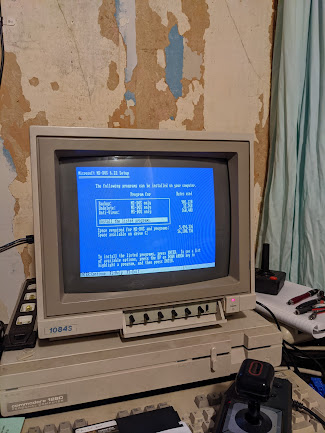 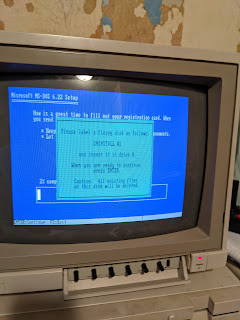 Ah yes! Here's the uninstall disc step! Which indeed I had on hand for this very moment! 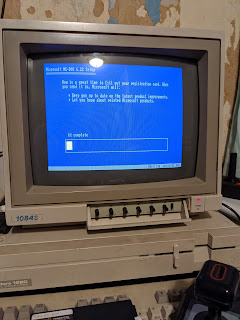 I wonder if I should fill out the registration card for this install and send it to Microsoft.
Ok, so that's done and now I have a working full DOS 6.22 installation. Now I can do all the fun things like making a DOS boot disk and recovery things. (For reference - you do that using FORMAT /S A: to format a SYSTEM disk that you can boot from; then you add things to it using COPY.)
Finally, I made a boot disk with the Intel EtherExpress 8/16 config program on it, and reconfigured my NIC somewhere other than 0x300. Now, I had to open up the PC/AT, remove the XT-IDE and install the EtherExpress NIC to do this - so yes, I had to boot from floppy disc. 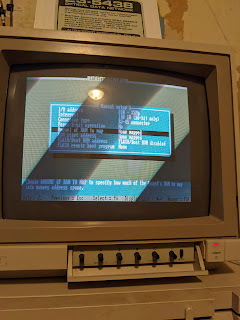 Once that was done, I added a bunch of basic things like Turbo C 2.0, Turbo Assembler and mTCP. Now, mTCP is a package that really needed to exist in the 90s. However, this and the RAM upgrade (which I don't think I've talked about yet!) will come in the next installment of "Adrian's remembering old knowledge from his teenage years!".
Posted by Adrian at 3:44 PM