I slipped and bought a TF536 to put into my Amiga 2000. TL;DR is it's now running, but it took a bit of fiddling to get there. When I was last getting it going I noticed it didn't like any Zorro-II RAM in there, so I simply disabled it (it wouldn't do much) and left it alone. The storage card I'm using (a GVP SCSI job) doesn't do DMA to Zorro-II RAM - it does DMA to/from a 64k IO/RAM window which then the driver memcpy()'s out.

Whacking it in with the CPU riser I got from amigastore.eu booted up fine as long as no other RAM cards were installed.

If I installed my storage card or any zorro-II RAM cards it just hung. Not fun.

So, I grabbed a different one. 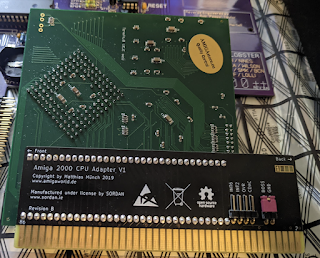 This one has a jumper for /BOSS to keep it enabled, and also has the FC0..FC2 pins (indicating the CPU state) also routed.

I plugged this in and bam. 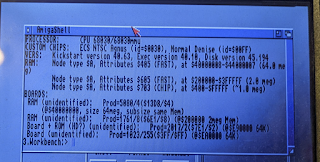 (note I didn't leave the 2MB RAM enabled on the storage card after this test; until I'm ready to screw around with programming stuff that explicitly wants to test Zorro-II/Zorro-III space RAM, I'll leave it off.)

I also tested it with an 8MB Zorro-II RAM expansion (the ZoRAM card that's available on the internet) and it also works fine.

Anyway TL;DR is - don't forget to ensure your accelerator card installation on an Amiga 2000 has /BOSS asserted, or a bunch of DMA/Zorro-II lines won't get routed to the CPU expansion slot and things won't work right.