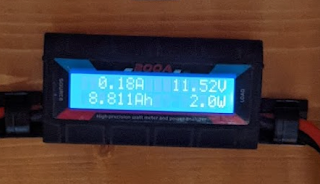 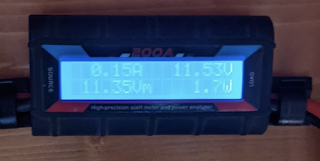 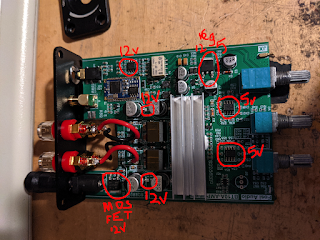 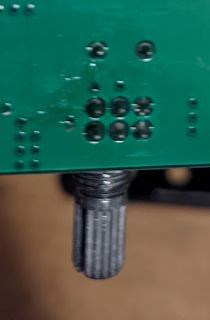 Posted by Adrian at 3:10 PM No comments:

On calibrating up a ubitx, or "why the hell is this so complicated"

I've built a few of ubitx/bitx40 radios over the last couple years. I built one of each for me, and a couple for other hams.

However, exactly zero (0) of the PCBs I've received have been calibrated even remotely correctly, so I've had to go spend time figuring out how to do it myself. Unfortunately it's not been super easy - the instructions online make it sound way simpler than it really is, and unless you're super careful you're going to end up constantly being off frequency in SSB mode.

The ubitx radio is organised in a very specifically clever way for CW versus SSB, which makes calibration actually not TOO terrible. In SSB mode all three oscillators are used in a three stage IF design. In CW mode however, the transmit side doesn't bother with the SSB path at all - it directly unbalances the first IF mixer and transmits using the VFO oscillator directly on the transmit frequency.

So when calibrating the VFO, the reason it wants to calibrate it using transmit instead of receive is because it doesn't involve the BFO frequency /at all/. Instead, it's calibrating only the VFO frequency directly.

When you do this stage, figure it out and write it down. I wish the offset was the whole 16 bit number so you could just dial THAT in, instead of how it's currently displayed (as a divided version of that, notionally ppm.)

I calibrate my VFO using a frequency counter and an RF tap. It's the only way to be sure. If you have a known-good receiver, you can tune it in SSB mode and do the math to figure out what the outputted tone will be at the given receive frequency. I've done this a couple times (before I bought a second hand frequency counter) using fldigi to display the audio spectrum, putting the radio into SSB mode and tuning to 9999.20 KHz. The 10MHz signal will show up as an 800Hz audio tone.

Anyway. Once you've done the VFO, it's time to calibrate the BFO. You have to NOT touch the VFO calibration at this point or it'll change your BFO calibration and you'll have to start again.

Ok, so the next oscillator is the USB/LSB frequency oscillator. The frequency is either ~57MHz or ~33MHz depending upon USB or LSB operation, so when the incoming signal mixes with this, the desired mixing product (either inverted or non inverted) shows up in the crystal filter passband. Now, in my v4 firmware I've made this also configurable, but by default it's a fixed value that they hope is in the passband of the crystal filter. I mention this only for completeness, you normally don't have to calibrate this.

The BFO calibration is more fiddly. This is the oscillator that when mixed with the output of the above stage brings the mixing product down to audio frequencies. (Ie, it's an SSB detector!)

When you start the calibration it'll reset to whatever the default is in the firmware, which is WAY off. When you start tuning in the BFO you'll hear the frequency spread of the background white noise shift as more of it comes into the passband, and .. then it'll disappear! And then as you keep tuning past the crystal filter frequency, it'll come back again! What's going on!

What's going on is that when you plot the frequency response of the crystal filter, it may not be exactly one big peak. A good example of it can be found here: https://ubitx.net/2018/04/14/ssb-crystal-filter-response/ .

Now, this is where things get a bit messy. When you change the BFO, it's not just changing the passband on the crystal oscillator. You need to make sure you're on the correct side of the filter so you're not getting an inverted copy of the mixing output.

The ubitx website suggests listening to an existing sideband transmission and figure out if you're on the right side by tuning the filter for maximum intelligibility. You can't use AM for this (eg WWV) because if you get the wrong side you'll hear a mirrored signal that sounds fine because it's AM, but you just won't be able to decode sideband.

What I do, since I have more than one good radio, is I hook up my ubitx to an antenna, my good radio to a dummy load, tune to them to the same frequency / sideband mode, set my transmit power to be like 5W on the good radio, and do a radio check. Yes, into my dummy load. The ubitx will definitely be able to hear it, and you can then set the BFO to maximise intelligibility and correct frequency centreing. You'll know for sure that you're on the right side of the crystal filter / mixing output because you'll definitely not hear yourself clearly otherwise.

After that? Well, I think we need a better way to characterise and calibrate both the USB/LSB frequencies rather than them being static as well as the BFO, and do them together. Ideally we'd be able to tweak both in order to definitely hit the right peak point of the crystal filter to minimise losses, but that will complicate the calibration quite a bit.