I wanted to hack on Amigaterm (https://aminet.net/package/comm/term/amigaterm) a bit, but I found out that someone already had done that (https://aminet.net/package/comm/term/amigaterm_enh). They fixed some bugs and added speeds above 9600 baud - 19200 works fine on the Amiga 500, and 38400 works fine on the Amiga 1200.

But I wanted to add a couple more things - play with what Amiga calls "serial hardware flow control" (which is .. not quite what you expect...) and fix up xmodem receive to allow it to truncate data at a particular file size. Without the truncation option the written file is a multiple of the xmodem block size (128 bytes) which results in binaries you can't actually run.

There's a very nicely put together build framework targeting m68k Amiga at https://github.com/bebbo/amiga-gcc . I haven't built it yet on FreeBSD - just Ubuntu Linux and MacOS/X. Then I wanted to get amigaterm to compile for workbench 1.3 as that's what is on my Amiga 500. It turns out that's quite easy - you just need to use the right command line option (-mcrt=nix13), but you need to be sure that you're not trying to use library versions and functions that are later than what 1.3 supports.

This did trip me up - there's a ChangeFileSize() in later OS versions (4.0 I think?) that isn't in 1.3, but there is SetFileSize() in 1.3 (library version 36). I ended up opting for just not writing out the data instead of writing it out and truncating.

Now that this is working I think I'll go and see if using 128 byte receive data buffers when receiving xmodem packets works better than byte at a time. I need to go and understand how they handled timeouts so I don't end up waiting forever for data to show up. That may end up speeding up receive transfers a little.

What I'd really like to do is bring over or write very small zmodem receive library to really speed things up to make it less painful to transfer the 880 kilobyte disk images (ADF). That'll make bootstrapping things less painful in the future.

Next up is fixobj. The source for that is on the fish-010 disk so I modified it to compile here. It's hard-coded to search the last 128 bytes for the end of an executable binary, which matches the normal 128 byte xmodem block size.

Finally, I've put them both in github here - https://github.com/erikarn/amiga-code .

Getting stuff onto the Amiga 500, or "holy crap please include bootstrapping serial file transfer utilities in your OS"

Yes, I know I'm ranting about 1980s OSes, but to be quite frank, modern OSes on a variety of hardware still have a similar problem.

Wait, what do I mean you ask? Surely you will always have ethernet/wifi/USB available? I almost started writing a bit on that here given I end up working behind the scenes on modern hardware and a LOT has to be working before you can talk over the network or, heck, even boot your device. But I'll leave that for another day.

This is a similar thing to what I found in a previous blog post about boot-strapping an old PC/AT before I had useful media (read: disks and other working machines.) It's doubly tricky for the Amiga because of it's non-standard floppy disk format that can't be easily read on PCs, let alone written to. You need to have another Amiga, or some modern multi-format disk interface like the Catweasel. I lucked out and at least got working Workbench 1.3 Main and Extra disks with the Amiga 1000 I picked up - but no working Kickstart disk, hence why I'm working with the Amiga 500 right now.

Anyway, the goal of this is to get the following to work:

This is... surprisingly annoying to do.
Firstly, how to get the initial files over. Workbench didn't come with a file transfer program, even with AmigaDOS. xmodem was around in the late 70s so it could've been used. Oh well. Luckily the Extras disk includes AmigaBASIC which can speak to both the disk and the serial port. And there are guides out there for how to write a simple non-error-checking binary receive program - I used this one.
I also needed to make a null modem cable up. Now, the Amiga 500/1000 used some of the RS-232 port pins for things other than ground, so it's best you make one of your own. Here's what I used for my Amiga 500. 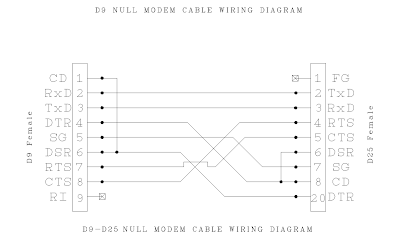 The Amiga 1000 uses a reversed serial port, and I will figure out that particular hilarity once I get it booting with Kickstart.
However! Not everything was, err, well documented. I remember Amiga stuff in the 90s, but not THAT well.
First up - the receive.bas program in the above link doesn't at all set the serial parameters. So before you start it you need to run the Serial preferences program and configure it up. It also assumes that you're using 1024 byte buffers, so you need to do the following:
Then yes, on the linux side I did the same (stty 9600 -parenb cs8 crtscts -ixon -ixoff raw iutf8 -F /dev/ttyUSB0).
Ok, then running the program. It's best you get the data going into the ram disk, so set your file target as RAM:filename. Easy.
Except the block size thing. Apparently with the way AmigaBasic speaks to the serial driver the transfers have to be in block sized blocks, not just the file size. So you need to pad the file you're sending. The receive.bas program will write out the correct length for you.
I did something like this:
That padded it correctly and .. well, after a few attempts I can get a ~ 20k binary to transfer OK.
Then comes the fun part, what to transfer. I started by transferring lharc. However, apparently the later versions don't work with Workbench 1.3! I had to use https://aminet.net/package/util/arc/LhA_e138 .
It took a few goes, but yes, I got a working lharc tool on the floppy disk.
Next up is transferring something less terrible to transfer files with. A lot of things are lha'ed, which is why I spent a lot of time trying to get lha to transfer. Next time I won't, I'll unpack them on the linux sending host and send the binaries.
I needed a small transfer program to work on Workbench 1.3. I found https://aminet.net/package/comm/term/amigaterm . It's small, it runs on Workbench 1.3 and it has xmodem support. Nice!
However! It's xmodem support doesn't ask for the receive file size, so it rounds it up to the nearest block size. No! Things like lha then don't seem to work right and binaries certainly don't run.
Ok, so how'd they do it in the 80s/90s? It turns out there's a little utility called "fixobj" which tries to find the actual end of a binary object inside a file and truncates it there. I unpacked https://aminet.net/package/misc/fish/fish-0010 and grabbed the small binary from it. Now I can transfer individual programs, like https://aminet.net/package/disk/misc/adf2disk11, to write out an ADF image to disk.
So, that's transferring right now upstairs via xmodem at 9600. Yeah it'll take a while. Luckily 901120  bytes (the size of an ADF image) is exactly 7040 blocks of 128 bytes each, which is what xmodem is using. Thus I should be OK without having to truncate stuff.
Once that's done I can start transferring things to get the IDE disk add-on I have here booting, and I can setup the rest of this Amiga 500 to do fun things.
What I think would've made this easier?
In any case I'm hoping by tonight I'll have this thing writing out ADF disk images OK albeit slowly, and I'll see if I can get zmodem working on something faster like 19200 baud.
Posted by Adrian at 7:33 PM 1 comment: 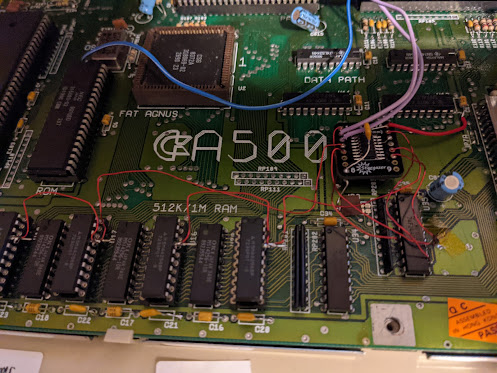 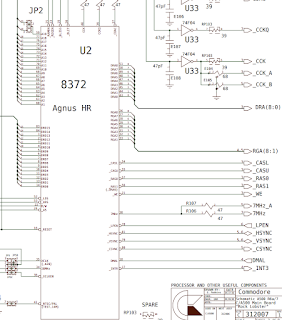 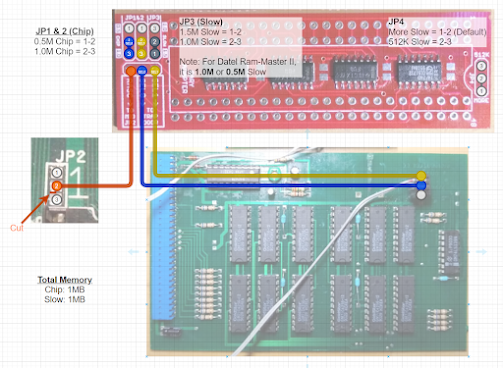 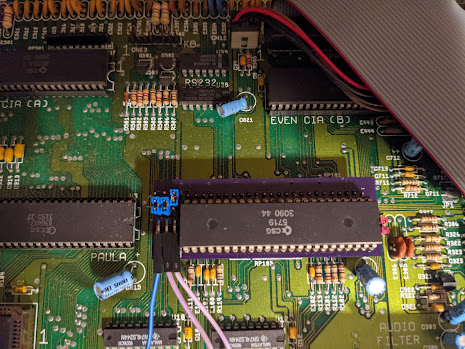 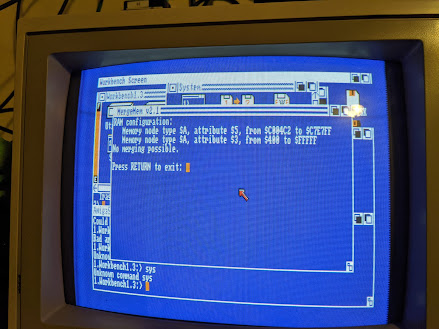 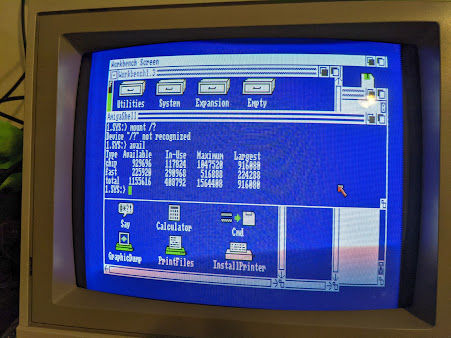 (Yes, I was playing with the default colours in the second one, I always disliked the orange.)
If I wanted more RAM then I could easily just piggy back more 41256's on top of the ones I've added and break out the CASL/CASU lines some more, but ... (a) I don't want to, and (b) in that case I'd really just go and build a full 1.5MB slow RAM expansion and undo what I did on the PCB here.
Posted by Adrian at 1:39 PM No comments: